Leon, a recent MRC grad, stated he “never thought he would make it to age 18.” Yet, Leon, 18, has graduated from high school and received his diploma while attending MRC. While at MRC, Leon also completed his application for college admission, his FAFSA, and the ACT. Leon describes what he has gained from the program. “Self-confidence, experience, knowledge, the motivation to get ‘out there and do something.’” Leon has enrolled in and is now attending the University of Memphis in Memphis, Tennessee. He began his freshman year in August 2015. He is majoring in Business with a concentration in Real Estate Management. He remains in contact with his Counselor at MRC and visits MRC frequently.

“I am doing wonderfully at school. I come home every day after watching the kids I babysit for and study for at least 2 hours a night before I do anything else. My plan is to graduate high school and study political science at Ole Miss and go to law school there. I had always wanted to be a lawyer. I miss everyone there at MRC. I wouldn’t be where I am today without any of you. The staff and counselors there definitely know exactly what they’re doing. So, I would like to give a big thank you from the bottom of my heart to every single staff member at MRC’s Youth Program.” 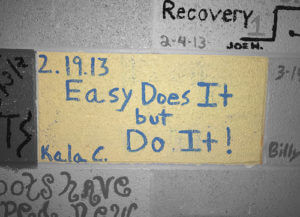 “MRC didn’t just save my life, it gave me life. When I got here I was 40 years old, a mother of four, homeless. I had no place to go. I was in and out of jail. I didn’t know where my children were. 20 months later, I can say I am very grateful for the amount of information MRC gave me in the short amount of time I was here. I am now in school to be a nurse. I have my own apartment and I have a job. I am able to take care of myself. I don’t go to jail anymore. I am a grandmother to two grandchildren and they look forward to seeing me. My children are now very much a part of my life. Even my mom, who at one point stopped talking to me and didn’t want anything to do with me, because she actually had to raise my four children.”

“I was a young girl with an addiction to Dilaudid when I came to MRC. I was on a dangerous road and headed towards jail or death for sure. Today I am 36 years old, have a beautiful family, and I am about to graduate with a bachelor’s degree in Chemical Engineering. I am worlds away from the lost, sad little girl who walked in MRC’s doors. MRC showed me that I had a choice and by doing so, they changed my life. Showing me I had a choice was the best thing anyone could have done, because for a long time I believed I had no choice. Giving someone the power of choice is a gift that keeps on giving. Thank you MRC, you really did help me. Without you, I would not be here today with the wonderful life I have today.”

“This place really changed my life. If you knew me before MRC, you would know I was a totally different person. I pushed away my family, I pushed away my friends, I pushed away employers, and I had no idea how to fix all of that. I didn’t think there was a way to fix it. I didn’t really do any research. I didn’t know MRC was here. I saw a billboard one day and I picked up the phone and called. I was admitted within a week and I stayed for 120 days. I needed every one of them. It has changed everything about me. My family, I have a relationship with my father and my sister. I’m working again. I have a group of people who support me and hold me accountable. That is the best thing.”

“When our youngest daughter began acting out, having behavioral problems, and problems at school, we thought we knew the answer. We thought we knew just what to do to help her. It didn’t take us very long to realize that with her drug addiction problem, it was bigger than we were. We needed professional help. We received recommendations for Memphis Recovery Centers and we finally chose to reach out and call the admissions director. I just cried and told them everything we were going through. I just spilled my heart of all the feelings and emotions we had been dealing with for so long. It was such a comfort to have someone on the other line that could listen and knew what we were going though. Someone who could literally tell me they could help us. Within two days my daughter was admitted to the community youth program at Memphis Recovery Centers. That was a hard day. That was the time my husband and I had to admit we had to let her go and let someone else try and help her. The next few months were really hard. You know, lots of sessions, lots of meeting, meeting other children who were going through the same things, meeting other families. It was a learning experience but, MRC gave us the tools we needed to communicate and help our child and to take our home back.”