How to Recognize a Cocaine Addict

Cocaine is a potent drug that was popular during the late 1980s and early ’90s. Despite a slight decline in its popularity, it still causes problems for millions of people across the United States. For those who suffer from cocaine addiction, their best chance for recovery is to get help quickly. Here are a few ways to recognize a cocaine addict.

How to Spot a Cocaine Addict 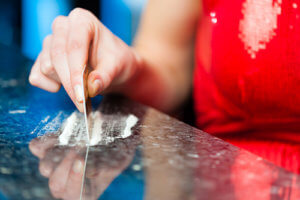 Everyone experiences mood swings. In fact, they’re a normal part of human nature. However, people who use cocaine typically suffer extreme changes in mood. They’re usually very chatty, vibrant and social at parties but become hostile and depressive when the drug wears off.

Unfortunately, these mood swings cause them to use more cocaine. With the drug, they feel happy and outgoing, like they’re on top of the world. Without it, they fall into deep depression and sadness.

Cocaine is expensive and pretty hard to get in some areas of the United States. In many cases, drug dealers give people a couple of hits for free to secure a new client.

In most cases, people have enough money to afford cocaine the first couple of times. Then, they run out of cash and resort to pawning belongings. Eventually, they have nothing left and ask for money or steal. For these reasons, financial problems are an easy way to spot a cocaine addict.

Cocaine is a drug that has short and long-term effects. It changes how people act and their physical appearance. Those who use it regularly tend to suffer from bowel problems, nosebleeds, and loss of smell.

Many of the physical appearance or other noticeable problems occur in the nose. The reason is that snorting cocaine is the most common way to take the drug.

Get Help for Cocaine Addiction Right Away

Whether you or a loved one has a problem, it’s important to get help right away. Use the information above to help you determine if a loved one has a cocaine addiction. At Memphis Recovery, we offer programs to help people overcome a number of drug addictions, including:

Don’t let cocaine ruin your life. Let us help you or a loved one overcome a cocaine addiction. Reach out to us today at 866-304-8254 for more information.